Every four years the NPS personnel at the Home of Franklin D. Roosevelt National Historic Site in Hyde Park, New York recreate the Torchlight Parade that took place on election night. On the four occasions when FDR ran for President he returned to his home to cast his ballot. The Torchlight Parade (gathering of friends and neighbors) would come to his home, Springwood, and he would come out on his porch to greet them. The recreations are held several weeks before election night to encourage voter turn-out.

What an honor it was for me to be asked to re-enact FDR at this year’s Parade on October 14. There were bands, placards, and park personnel portraying Roosevelt family members. My wife, Ruth, was also asked to portray Sara Roosevelt (I’ll never let her forget that she was portraying my mother.)

We all waited in the vestibule of the FDR home before the parade reached the house. What a feeling to know that I was sitting in a spot that FDR crossed many times during his life. Chilling in the best way possible.

There was a record turn-out at this parade and the crowd seemed to enjoy the entire experience. Afterwards, we all retired to the Wallace center on the FDR grounds and I was thrilled an the dozens and dozens of people who wanted a picture with “The President.” The many compliments I received from attendees and Park personnel was indeed one of the highlights of my life.

On August 25 I once again was able to visit with my friends at the Saratoga National Historical Park.  On this third visit there I helped celebrate the 100th anniversary of the National Park Service.  On August 25, 1916 President Wilson established the NPS and during his administration FDR vastly enlarged the scope of the park service by putting historical and cultural monuments and sites under its jurisdiction.  He also signed bills creating several new park.  Visitors to the national parks increased from about three million in the early 1930s to more than fifteen million people by 1939 despite those being depression  years.  That is in part due to the work done by the Civilian Conservation Corps (CCC) created by FDR.  We had a nice fireside chat at the SNHP and enjoyed s’mores afterward.   A great birthday party.

What a great event I was able to be part of on July 16 and 17.  The Abraham Lincoln Birthplace National Historical Park celebrated its centennial that weekend.  Their goal was to have all the U.S. Presidents attend who had visited the Park.  They almost made it.  The William Howard Taft reenactor had to pull out at the last minute for health reasons.  FDR, however, did share the weekend with Teddy Roosevelt, Dwight D. Eisenhower and, of course, Abe himself.  Even Mark Twain, who had been instrumental in helping create the park, was there.  All the presidents repeated the speeches they had made there.  We were also able to greet the hundreds of visitors who attended over the weekend.  My thanks to Park Ranger Gary Ferguson and the rest of the Park staff.  It was a fantastic event and I was honored to be part of it.

On May 18, 2016 I had the honor of serving as the Keynote Speaker for the 26th annual Wilderness Wildlife Week in Pigeon Forge, Tennessee.  This week-long event celebrates activities and displays of the nearby Smoky Mountains.  On August 25, 1940 FDR dedicated the Great Smoky Mountains National Park.  The park is now the most visited of the nations National Parks.

I, as FDR, was able to share the history of the National Park Service on this, the centennial year of its establishment, as well as relating the story of how the Great Smoky Mountains National Park came to be.  I was humbled at the standing ovation that our 32nd President received from the large crowd in attendance.

I am looking forward to appearances at the Abraham Lincoln Birthplace National Park in July, the Saratoga Historic National Park on August 25 (the actual day of the NPS centennial) and at FDR’s home on October 14 to recreate the Torchlight Parade that he was a part of on election nights during his presidency.  I hope to see you at one or more of these events. 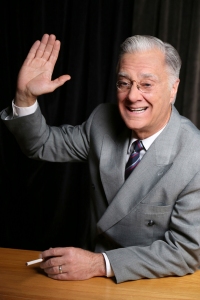 I just experienced the thrill of appearing as FDR for four retirement communities in the Saratoga Springs/Schenectady/Albany New York area.  Many of these people lived through World War II and experienced the Home Front activities about which I spoke.  They shared their personal experiences and I learned so much.  What a wonderful generation.  I was honored to bring back memories for them.